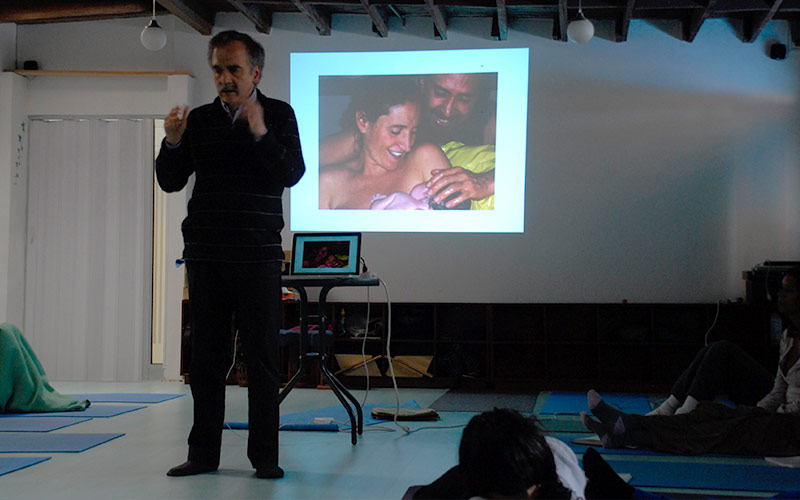 Had someone told me a few years ago that I would be traveling to South America a couple times a year to train yoga teachers to work with pregnant women and teach doula trainings, I would have thought they were crazy.

In middle school, high school and college I studied French, certain I would someday spend a year or two eating croissants and chocolate while walking the streets of Paris. These were my thoughts as I stepped off of the plane in Bogotá, Colombia.

I had been to Peru to train yoga teachers earlier in the year, so I wasn’t scared to be there, just perplexed at the idea that I WAS there. I had ended up loving the people I met in Peru, and kept in touch with them; however, this training was different. I would be working with a translator as most of the students spoke only Spanish.

Again my thoughts returned to the many years studying French instead of Spanish, even though I lived in California where speaking Spanish could be very helpful. I had worked with a translator before in China, and the experience had been amazing. At least I could focus on that. But this was Bogotá, and women from all over South America had come to take my training.

We (my soon to be husband and partner/manager Jake and I) got off of the plane, went through customs, and met one of the owners of the yoga studio, Ana, as we walked out of the airport. Her smile as our gazes met was warm and comforting, and I felt instantly at ease. We had dinner that evening with Ana and one of her partners, Juliana, as well as their husbands, and our translator, Lisa, who owned another yoga studio in Bogotá. We were also joined by an amazing man named Mauricio Espinoza.

Before I go to any new place to teach, I like to do research about birth in that area. I found out very little about Bogotá and childbirth in my research; however, I did find one name that came up a number of times, that of Mauricio. I had contacted Ana while still in the U.S and asked her to put me in touch with him. She had emailed me back the next day and said not only had she contacted him, but he really wanted to meet me and would be joining us for dinner on the night of our arrival.

Our meal was amazing, our translator, Lisa, was wonderful. Ana, Juliana and their husbands were so warm and welcoming, and Mauricio and I spent the evening talking about birth in Colombia.

I could see the fatigue and sadness in his eyes as he told me of the up to 80% cesarean rate at some of the clinics in Bogotá; the way, in the worst places, women were put into a room with many other women and no partner allowed, put into bed with an IV and discouraged from getting out of bed. Ultimately, many ended up with cesareans. He was the only one he knew of who provided an alternative to the clinics: homebirth.

This option to him was better than the clinics, but still not ideal. He relayed a story of a birth a few days before where the woman almost didn’t make it because they couldn’t get her bleeding under control. She had to be transferred to the hospital. These cases were rare, he told me, yet very worrisome as traffic in Bogotá could be so bad that it could take long periods of time to drive short distances. This put the women and babies more at risk. He said that he has to hire an ambulance for each birth to be waiting outside “just in case”. His wish was that there was an environment inside the hospitals where women could have a home-like birth, where they would be able to tell the doctors what they needed ie: to walk around, get into water, connect to their bodies and babies, uninterrupted except for the occasional check of the baby. He wanted women to be able to experience the empowerment of childbirth, where they are in charge, as they would be in their own home, unless interventions were necessary. He wanted women to have doulas and birth to happen on the baby’s and woman schedule, not the doctor’s (I later learned that many OB’s in Bogotá will induce labor at 38 weeks regularly and only allow the woman 30 minutes to 1 hour of pushing before doing a cesarean.) We talked for a while, sharing stories of the way birth is done in each of our countries. He agreed to come and talk to my students, and we went back to our hotel room. I had been in Bogotá only a few hours and not yet met the students I was going to start teaching the next morning, and I knew this training was going to be important. 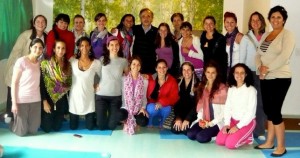 The next morning the training began. The 24 women introduced themselves one by one, each had her own story and her own reason for attending the class. The class was packed full, each day we would talk about pregnancy, yoga and childbirth. I had the women put on the pregnancy belly and experience the yoga poses as a pregnant woman would. Those who had had babies would share their experiences, those who hadn’t would ask questions and share thoughts. I got to know them in spite of the language barrier and we laughed and we cried and we learned from each other. One woman was a doula and able to talk a lot about birth in Colombia. The second day Mauricio came to speak to the group. He brought a slide show and captivated us all as told of his experiences both as an OB in the clinics and then as a “midwife” delivering babies in women’s homes. Most of all he talked about women and partners being empowered by birth, and he talked about love and a woman’s ability to connect to her baby and her body to bring new life into the world. Most of the women in the room had never seen images like the ones he showed, women giving birth in water, at home, their faces showing strength, commitment, and love, and the immeasurable joy of the first moments of birth with mom and baby together as families were born.

At the end of the training I said this to the class: “I know you feel discouraged with the way that childbirth happens in Colombia. I know there is a huge gap between the way birth is done at the hospitals and the way it is done at home. It may seem like there is nothing you can do to help. However, we as yoga teachers can help, we can help women to strengthen their bodies and keep them flexible, to connect their bodies to their breath, to observe sensations in their bodies and, allow them instead of fighting against them, to use their bodies and positions to help babies attain optimal positioning. If each one of you help just one woman to feel more empowered by being strong, connected to her body and show her how powerful she is, you will be helping her redefine herself, helping her baby come into the world in a more gentle way. You will also be helping her partner to have a positive experience that will impact the way he thinks about his baby and the mother of his baby forever. If you each do that for just one woman and her family, we as a group, would be impacting almost a hundred lives for the better.”

I talked about the importance of putting down our fists and our inclination to spend our energy fighting the system and being confrontational. Instead, slowly, using baby steps, to integrate into the system and make changes using love instead of hate.

OB’s like all other people, want to be respected and appreciated for the job they do, not told that everything they do is wrong and that they are harming the very women they feel like they are helping.

I believe we can open up conversations with respect and it will take some time, but when we earn the respect back, that’s when we will see change. I have seen this happen in the hundreds of births I’ve attended, there are OB’s I’ve met that it took me years to gain the respect of and now I have it and the women get the births they want. Until then, women can empower themselves with knowledge and have open and informed conversations with their doctors. They will be sure of themselves instead of confrontational.

I refuse to believe that the OBs who deliver babies for a living want women to have terrible birth experiences; I believe the gap between homebirth and hospital births can be bridged; and I believe that sharing knowledge and ideas is the only way to achieve this and the more we fight, accuse, and point fingers, the deeper the gap becomes. 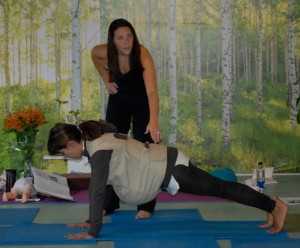 At the end of the class I looked into the tear filled eyes of the students as they thanked me for coming to their country, and I knew I’d be back. Sure enough, it looks like I’ll be going again in February for another Prenatal Yoga training AND a doula training and I have begun to open conversations with OB’s there as well. It turns out there are some out there who want to see change and working together with them, as well as providing my trainings, I hope to help make a difference for women giving birth in Colombia.

This site uses Akismet to reduce spam. Learn how your comment data is processed. 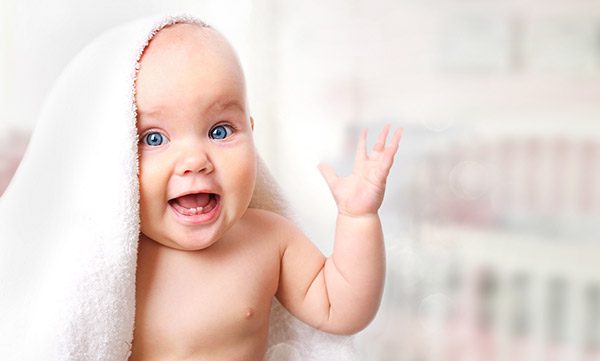 Stay in touch with The Dolphin Method and Jennifer More

Thank you so much for visiting the Dolphin Method website. We hope you will consider signing up for our mailing list. From time to time we send out information about our Prenatal Yoga Teacher Trainings, Womens Yoga Workshops, and Doula Trainings as well as information about our videos, books, and other products to help you have the best birth you can have or assist others with their pregnancies and births.

You have Successfully Subscribed!